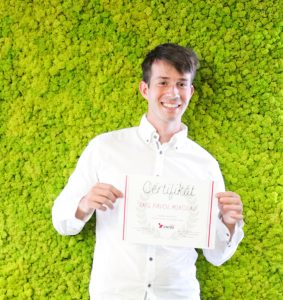 Pavol saw the job offer at Swida on the Profesia portal. After graduating from university, he sought employment in a wide range of job opportunities. “Although I studied mechanical engineering, I still enjoyed something else, so I was looking for a new way that Swida might offer me.” The published offer fascinated him with its motivational score, through which he can earn decently even in a short time. “It’s not a fixed amount for which I will work 10 years, I have the opportunity to earn right from the beginning as I start.”

Swida Academy was a big plus for him, he sees it as a sign that Swida has a future. “As part of mentoring, Igor directed us mainly to effective expressions and correct terminology. The academy brought me a greater overview of logistics, as well as information about what Swida is dedicated to, what work processes it performs, how business works, and symbiosis in the department. If I had to describe Swida in one word, it is a collective. This is what creates an atmosphere that is diverse every day. There are also different people who create the perfect team and I feel great here from day one. ”

He concludes: “After graduating from the academy, I still don’t know exactly what I’m going to do, but I’m slowly finding out how it will go. From my colleagues, I have information and vision for the upcoming development and it is up to me how I will survive and whether I will be determined enough. The basis is to believe. ” 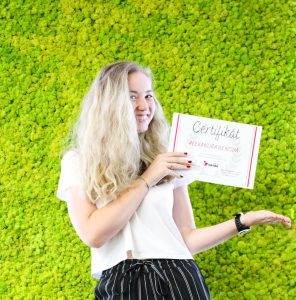 Alex learned about a job at Swida from her acquaintances. “My godmother is working on dispatch, which helped me with the recommendation. I was interested in the offer precisely because of the dynamics and foreign languages. I said to myself that I would use my knowledge of English and put it into practice. “

She was very satisfied with the academy, highly appreciating its reworking and the quality of the workshops. “Igor is an excellent mentor, he cared about everyone equally, and together with other colleagues, they gave us a lot of experience, which I liked. We tried to find our best characteristics of ourselves, realized them, and know how to use them in practice. We also named our negative characteristics, learned to work with them, transformed them into something better, and move on. I found a lot new about myself, for example in the typology of personality, where I was pleasantly surprised. They taught us to be ourselves and not to play anything. ”

But she believes that her experience will be many years and she is looking forward to working with us. “So far, I can say that I perceive Swida as a company with a vision, they know what they want and what is their goal in the logistics market and trade. Everyone wants to grow here, move forward and I think that is the reason for the success of this company. In such a short time, they have reached the top place in Slovakia in logistics, which is great. ”

She is convinced that Swida is the right opportunity for her career and she believes that she will be successful in performing work tasks and will improve both personally and professionally. “I would like to continue to build good relationships with colleagues and I believe that I will be a valid member of this great Swida family. I look forward to this experience that awaits me and I hope it will last a long time. “ 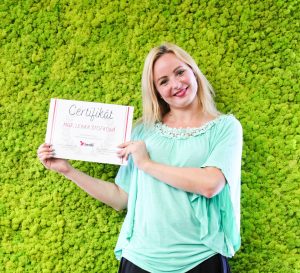 In Lenka’s situation, the Profesia portal again played an important role, through which she found out about the job offer. It fascinated her primarily because it is a relatively young company, which also received the Diamond award of Slovak Business. As she claims: “Another top for me was that it is a dispatch company that organizes transports throughout Europe. I also enjoyed communicating with clients in English.” Lenka has lived in England for the last 5 years, from where she recently returned. She completed the interview in the form of a Skype call, which she regarded as a sign that Swida is a company that is up to date.

Lenka evaluates the graduation of the academy as follows: “I really enjoyed the academy, it was great. It gave me the opportunity to get to know the company better, to perceive its strategies and goals, but also the functioning of individual departments. We have all learned a lot, whether from the dispatch or sales department. We also tried exemplary situations, we rehearsed and practiced a lot. I additionally evaluate the team very positively, we all helped each other.”

She would define Swida as a company that takes care of its employees and motivates them to perform. She also appreciates the interest in the employees’ opinions on various issues, and last but not least, the young team is an advantage for her.

Swida Academy gives a chance to every skillful candidate who wants to stand out in our company. Just as we put everything into it, we expect a promising candidate to show his potential and desire to learn something. We are glad that this “incubator” has proved its worth to us and the graduates of our academy form an integral part of our sales teams. We wish all newcomers a good and successful start in their new job. 🙂

What did 2020 bring us and what will be the most important thing in the new one?

Thanks to the fact that last year was quite varied and turbulent, also we experienced a number of new business…

ARE YOU THINKING ABOUT A FREIGHT FORWARDING PARTNER? DO NOT SEARCH FOR SIZE!

Not size, but flexibility and reliability are, in our experience, a decisive factor in choosing a partner for freight forwarding.

Working in freight forwarding is equally difficult for women and men. In our company, we give equal opportunities to both…